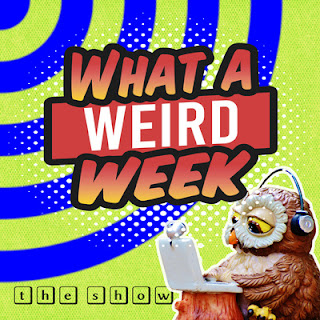 EpisodeAudio🎃
EpisodeBlogs🎅
Subscribe📡
This is the show notes blog for the What a Weird Week Podcast: the top 10 weird stories from the news. Listen to the Episode Audio and Subscribe to the podcast! Here are the show notes for Fri Nov 18, 2022, Season 4 Episode 7 ...

Notes:
- wait, there's more than one Scream painting? Am I a cultural dunce for not knowing this?
- there have been a handful of art masterpieces that got mildly vandalized* in the name of saving the planet
- this time the protest was shut down before anyone could glue themselves to anything... and idk if they were also planning to throw something at the painting... (they've done tomato soup and runny mashed potatoes... I think pumpkin pie filling would've been a good choice ... or ICE CREAM!!!!
- I'm trying to remain objective about these protests... on one hand you've got young people who are worried about the planet and have devised a way to get attention without violence or doing too much damage (like, you could imagine a scenario where someone suggested that they start burning down the museums or something... but instead they settled on 'Operation Krazy Glue and Mashed Potatoes'... and if they save the world through this I will be extremely grateful.
- the other side of this is that museum staff have to clean up the mess and museum patrons don't get to see the masterpiece that they paid good money to lay eyes on. A lot of the press reports include something like 'has climate change activism gone too far?' in the headline... so you kind of know where some of these news organizations stand... like, if you think mashed potatoes is too far, wait until the kids break out their squirt guns filled with clam chowder! 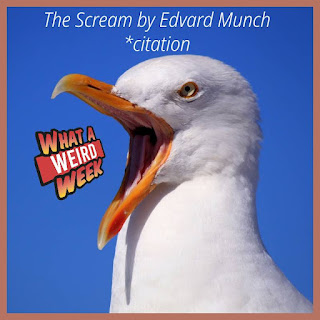 ❾Headline: the Head of Turkey's bakers' union has been arrested after calling bread-eating societies 'stupid'

Notes:
- what the what now?
- do you feel attacked by his statement or do you feel hungry?
- the reason he was put in jail is political... what he said was meat as an insult to the president of Turkey I guess? "Turkey jailed a bakery union head for "publicly insulting the Turkish nation" on Nov. 9, state media reported, after he said society's "stupid" fondness for bread explained why it had elected President Recep Tayyip Erdoğan's governments for two decades."
- You have to be careful what you say about the government in Turkey because they will throw you in jail...
- so I was angry going into this story, thinking that this fellow was insulting bread...
- the story turned into a freedom of speech issue so I'm cutting this fellow som slack... he was probably hangry too* citation needed.
- "In addition to insulting our nation and bread, this person's statements show that he is an element of the politics of hostility,"
- "He is now awaiting trial on the charge of “insulting the president'"

Notes:
- "If you can give yourself goosebumps, your brain might be special"
- this study found that people who can goosebump themselves do it to "heighten emotional experiences, while engaged in activities like sex, listening to music or dancing."
- "Not only can people with this ability enhance pleasurable emotional experiences, but they also scored much higher on the personality trait of Openness"
- look, I mean no disrespect and maybe I'm just jealous of your amazing goosebump abilities, but if being open to things is a side effect of learning how to goosebump yourself, I don't want any part of it...
- I've been trying to self-goosebump for about an hour and I have a headache.
Link/media: (https://taboolanews.com/article/8c5bf966-d061-14e6-a932-b079ae94ab15)
❼Headline: When Chocolate turns white you should panic *citation

Notes:
- Live Science has a piece about why chocolate turns white after awhile...
- if you're like "I've never seen chocolate turn white. wth?" Good for you! One life goal we should all have is eat the chocolate as fast as possible!
- so when chocolate gets that white powdery stuff going on, its still OK to eat... that's not why you should panic... it's just that if chocolate has turned white you should have shared that chocolate friend! Be a pal, share that chocolate before it gathers dust.
- it's called chocolate bloom btw, and the reason it happens is your bad attitude... jk it is a chemical reaction with the cocoa butter and/or sugar.
- Live Science did a whole story about this!? 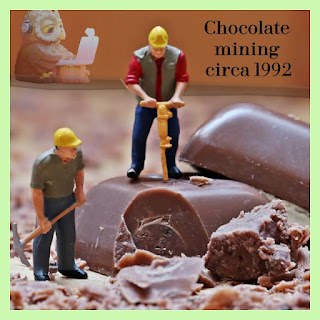 ❻Headline: Toy Hall of Fame continues to be interesting

Notes:
- this year these toys got voted in to the THF: the Top... Masters of the Universe/ He Man toys... and Lite-Brite.
- this means that several finalists were NOT voted in this year... sorry, Bingo, Nerf, the piñata, and Phase 10 - it just wasn't in the cards. HIYOOOOO!!! (Phase Ten is a card game you guys.) If you want me to retire that joke, quit denying Phase Ten a spot in your weird museum. 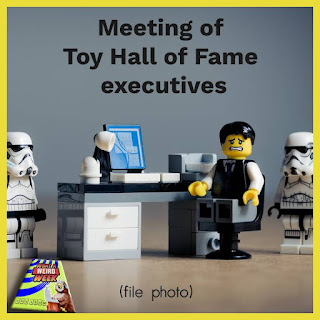 Notes:
- happened the other day at a bar in Casper, Wyoming
- 74 guys lined up side-by-side, made ... beard braids? ... whatever you call it... they parted their beards and clipped it to their neighbor...
- 150 foot beard chain shattered the old record!
- they say it wasn't easy... you have to stand still and wait until everybody's clipped in... then wait for the official measure... no one can break the chain!
- what if you got an important call you had to take??
- also, I imagine at least a few of the fellows couldn't untangle their beards after the record was set and now they're trying to just make it work somehow... double dating... job sharing... driving in the carpool lane...

Notes:
- this was in all the news feeds...
- the founder of Amazon wants to give billions and billions and billions of dollars to charity.
- it's like that story where the main character is cursed and has to give away all his money and he has so much money that there's not enough time*
(*if that story doesn't already exist ©2022 Weird Week Productions.)
- Bezos is 58-years old and the fourth richest person in the world at time of recording.
- Dolly Parton has her own charities and seems very trustworthy so I think the money will help people... but let's face it, everybody loves Dolly so even if she spent it on fireworks ... or producing the world's largest 'coat of many colours'... I wouldn't even care.

We’ve just announced a new Courage and Civility award recipient — @DollyParton, who leads with her heart, and will put this $100 million award to great use helping so many people. She joins prior awardees, @VanJones68 and @Chefjoseandres. Congrats, Dolly! pic.twitter.com/dzTuoGVp3G

❸Headline: "Man who ate 40 rotisserie chickens in 40 days says it felt like 'the right thing to do'"

Notes:
- "It was something in my subconscious that was pushing me to the longevity of at least seven days, and then 30 days. And then at 30 days, I didn't feel enough pain, so I took it to 40."

Notes:
- he calls himself Uncle Chen.
- he placed 574th out of almost 1500 runners.
- placed number one in our hearts though?

Link/media: (https://www.cbssports.com/general/news/chinese-man-50-runs-marathon-in-under-3-5-hours-while-smoking-cigarettes/)
🏆Headline: We got featured in a Bored Panda Article last weekend.

Notes:
- thanks to Adelaide the writer who reached out about weird new! 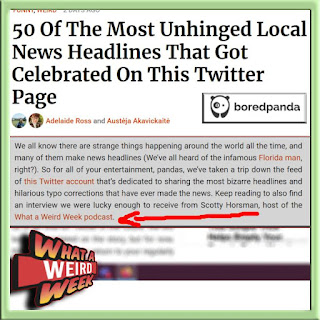 Notes:
- ""Hey, guys, what the BLEEP is a Bulk Barn?" - Mason Tanner's mind was blown by this store we have in Canada that has big ol barrels of stuff that you can scoop out and buy in bulk.
- they must have something like this in the US? (Mason is from Michigan... do they not have something like this in Michigan???
- side note for US listeners: Bulk Barn has this effect  on people where it's like you're a kid in a candy store... EVERYBODY loses their mind at Bulk Barn at some point because there is so much candy...
- If you work or have ever worked at Bulk Barn... God bless you for what you do... 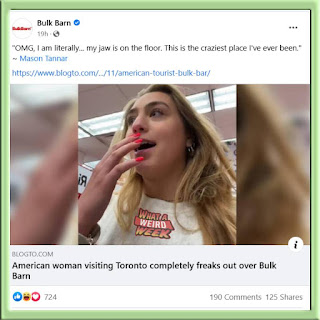 🏆Headline: "Bright flash of radiation sent through the universe after black hole rips star to death:

Notes:
- That's how you write a headline when it seems like all the 'asteroid near-miss' reporters are getting people's attention!
- more from the article: "Scientists have watched the final moments of a star after it was torn to shreds by a previously unknown black hole."
- I don't like how all these surprise black holes keep showing up... they're sneaky. 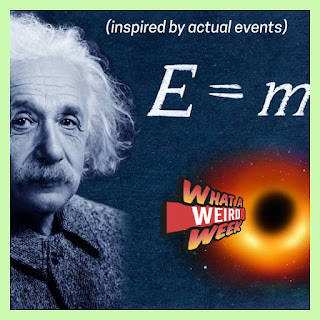 Notes:
- headline paints the whole picture.
- the news story says the clip "resurfaced on Twitter" ... it's an older clip which somebody revived. 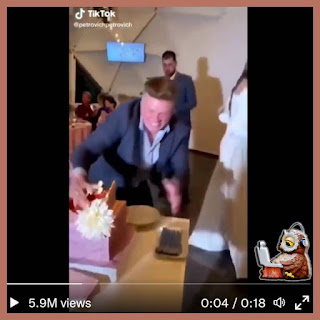 Notes:
- "An 8-year-old boy recently killed a venomous cobra in India after recieving a venom-free "dry bite" from the snake and then biting back in retaliation."
- the snake did not recover from its wounds.
- the boy did recover.
- Why is this kid not on the cover of Time Magazine yet? "BadA$$ of the Year" edition??
- snakes choose to do dry bites sometimes to save on venom?! what the hay?!! 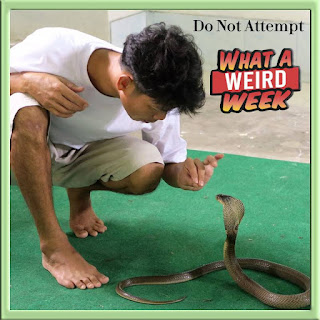 icymi, these posts got clicked a lot last month

November 08, 2022
Early on the morning of Tuesday, November 8, 2022 it's the last total lunar eclipse of the year! You remember Total Lunar Eclipses... that's where Zombie AND werewolf activity has a significant increase * ( https://bit.ly/citationlink ). It's ALSO where the Sun, Earth and Moon line up for your viewing pleasure. Here on the East Coast we get a great view! ( unless it's cloudy ). The greatest eclipse will happen at 6:59a on Nov 8th. *While all the lunar eclipse stuff is happening, it's also time for the Taurid Meteor Showers...      "best observing time is before the full moon arrives on November 8. But, if you’re out on the morning of November 8 watching the total lunar eclipse, you might get lucky and spot some Taurid fireballs as well ... If observing during the evening hours, look eastward. Those viewing after 2 a.m. should face west. If the moon is in the sky, keep it out of your field of view to avoid ruining your night vision." (via https://earthsky.o
Read more

November 23, 2022
🎅 Light Up Riverview kicks off Thursday Night (Nov 24th) at 7pm, along the Riverfront Trail ( Coverdale Rd ). There will be: -Lights! (obvious) - tunes! Flea Market Underground performs the rock and/or roll genre of music at the Riverfront Gazebo. - treats!   - holiday magic - marriage proposals* (citation needed) - friends - family - ghosts trying to get you to become a better person* (citation needed) - the Youth Village will be along the trail past the covered bridge. It's where you can donate items for those in need (organized by Immaculate Heart of Mary Youth)... items being collected include CEREAL and HATS/MITTS/ GLOVES. Also here: delicious hot chocolate! Sold by RHS Dragonboat Team and in support of Atlantic Wellness. PLEASE BRING CASH FOR THEIR HOT CHOCOLATE SALE! Youth Village has a selfie station y'all!! AND colouring pages from the Riverview Youth Collective! - mailbox especially for Letters To Santa! Note: after the event that mailbox will be relocated to Ri
Read more 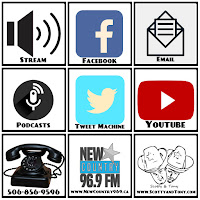