Scotty and Tony Read 'Twas the Night Before Christmas: a literary deep dive into the Greatest Christmas Poem of all times!!

🎅 'Twas the night before Christmas, when all through the house
Not a creature was stirring, not even a mouse;
The stockings were hung by the chimney with care,
In hopes that St. Nicholas soon would be there;
🎄 Question: Does Santa bring mice presents? Because, why would they not be stirring? Like, are they trying to be good too?
*Followup: Do you know what the mice want from Santa?
- Cheese
- Tougher cat laws
- just, like, a seat at the table, you know? Like, "We live here too... put the broom away Mrs. Jones and let's negotiate a truce."
🎅 The children were nestled all snug in their beds,
While visions of sugar-plums danced in their heads;
And mamma in her 'kerchief, and I in my cap,
Had just settled down for a long winter's nap,
🎄 Sugar Plums and Caps... Scotty's fave recipe for Sugar Plums involves sweetened condensed milk... if the recipe seems too complicated, just drink the sweetened condensed milk.
And now, Cap Talk with Tony©... How many hats does he own? Over 47,000* (citation needed)
The night cap and having a nightcap are closely related...
"The figurative use of nightcap in the sense of a hot or alcoholic drink taken before bedtime is often a jocular euphemism for something alcoholic, which also warms one. But it may have originally arisen because a late-night drink and the donning of a nightcap were both associated with preparing to go to bed."
🎅 When out on the lawn there arose such a clatter,
I sprang from the bed to see what was the matter.
Away to the window I flew like a flash,
Tore open the shutters and threw up the sash.

🎄 Dad Joke Alert: What happened when the cat ate the beauty queen's Decorative Shoulder Ribbon? It threw up the sash!
What is a sash really? Now, Sash Talk with Tony:
"A window sash is the part of the window that holds the glass and the framework around the glass to keep it in place. Window sashes are fitted into the window frame and may or may not be movable. Most windows in newer homes are sash windows."
Now Sass Talk with Tony: "You call that a decorative Shoulder Ribbon? It looks like somebody threw up the sash!" 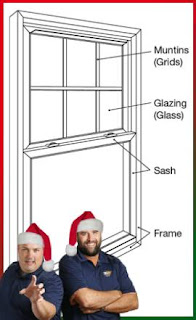 🎅 The moon on the breast of the new-fallen snow
Gave the lustre of mid-day to objects below,
When, what to my wondering eyes should appear,
But a miniature sleigh, and eight tiny reindeer,
With a little old driver, so lively and quick,
I knew in a moment it must be St. Nick.
More rapid than eagles his coursers they came,
And he whistled, and shouted, and called them by name;
🎄 Before we get into the reindeer names, let's not gloss over the fact that these flying caribou are faster than eagles... Do you know how fast eagles can fly?
- Bald eagle: 120 to 160 km/h
- Golden eagle: 320 km/h !!!!
Those reindeer are:
- as fast as a Porsche 911
- faster than a military helicopter
- faster than a tornado!
Please, if you think of it, leave a carrot or something for those reindeer. They need the energy. Also, maybe a Red Bull or Gatorade.

🎅 "Now, DASHER! now, DANCER! now, PRANCER and VIXEN!
On, COMET! on CUPID! on, DONNER and BLITZEN!
To the top of the porch! to the top of the wall!
Now dash away! dash away! dash away all!"
🎄 Those are the big names in reindeer transportation right there. Everybody knows those deer. What are some other reindeer who deserve recognition?
- Rudolph: he saved Christmas singlehandedly... singlenosedly
- Sebastian in logistics: without the logistics team, who knows where the presents would end up! Their job is vital to the holidays.
- Charlene in tech support: you can count on some kind of software or hardware issue on Christmas Eve. Charlene and the Dream Team are ready to remote in and solve any issues. One year the entire hard drive was corrupted and they had to re-install the entire system three minutes before midnight on Christmas Eve. Very important reindeer... should have their own song.
🎅 As dry leaves that before the wild hurricane fly,
When they meet with an obstacle, mount to the sky,
So up to the house-top the coursers they flew,
With the sleigh full of toys, and St. Nicholas too.
🎄 This poem was written in 1823... so what kind of toys were in that sleigh when Clem Moore looked out his window on that Christmas Eve? Probably lots of dolls and balls... but the kids back then also were playing with Bilboquets. Remember when those Kendamas were so popular? You'd try to catch the ball on the stick... that's basically what a Bilboquet is. 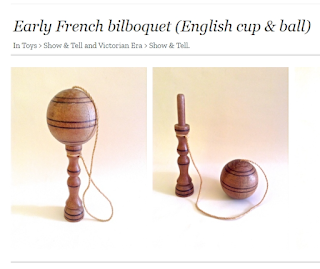 🎅 And then, in a twinkling, I heard on the roof
The prancing and pawing of each little hoof.
As I drew in my head, and was turning around,
Down the chimney St. Nicholas came with a bound.
🎄 Now, our theories on how Santa's sleigh and those reindeer are able to remain on the roof without sliding off:
- sticky sleigh spray adhesive
- reindeer cleats / turf shoes
- Grappling Hook
- other?
🎅 He was dressed all in fur, from his head to his foot,
And his clothes were all tarnished with ashes and soot;
A bundle of toys he had flung on his back,
And he looked like a peddler just opening his pack.
🎄 Facts about Peddlers:
- were the original travelling salesmen
- hardly ever gave sales receipts
Types of peddlers and their challenges:
- Cheesemonger (cheese) ... would probably have to battle the temptation to eat delicious cheese all day. It would help to be a lactose intolerant cheesemonger.
- Costermonger (apples) ... those things literally grow on trees. People would be like "I'm not paying a haypenny for this, I can pick my own."
- Fishmonger (seafood) ... good Lord the smell. It'd be like if your buddy who you did a radio show with ate sardines in the control room.
- Ironmonger (iron wares) ... so heavy. You literally have a sack full of iron on your back. In a time before back pills and CBD oil.
🎅 His eyes -- how they twinkled! his dimples how merry!
His cheeks were like roses, his nose like a cherry!
His droll little mouth was drawn up like a bow,
And the beard of his chin was as white as the snow;
The stump of a pipe he held tight in his teeth,
And the smoke it encircled his head like a wreath;
He had a broad face and a little round belly,
That shook, when he laughed like a bowlful of jelly.
🎄 Here we have one of the first eyewitness reports of Santa, almost like he's giving a statement to the police... And now we present Scotty and Tony's Real History Minute: we take you to police headquarters where author Clement C Moore speaks to the police:
- Police: "Mr. Moore, thanks for coming in. I'm Officer Jones, I'll be taking your statement... our sketch artist will be drawing the suspect... can you describe the man who you say was in your house?"
- CCM: "Um... twinkly eyes... cherry nose... um... rosey cheeks... quite a hefty fellow too..."
- Police: "Did he have any scars, tattoos, or distinguishing marks?"
- CCM: "He had what I like to call a 'Bow Mouth'. Also, you need to make the face broader... (pause)... broader! (pause) Like really really broad!"
- Police: "OK, just a couple more questions... can you give us a list of things the intruder stole?"
- CCM: "Oh, no no, he GAVE us stuff. We had MORE stuff after he left. He did eat a cookie, though."
AND SCENE!
🎅 He was chubby and plump, a right jolly old elf,
And I laughed when I saw him, in spite of myself;
A wink of his eye and a twist of his head,
Soon gave me to know I had nothing to dread;
🎄 Things we learn fromn this part of the poem:
- Santa is jolly
- Santa is funny enough to make you laugh in spite of yourself... like when a comedian makes you do a spit-take
- Non threatening
- Knows how to wink like a boss
🎅 He spoke not a word, but went straight to his work,
And filled all the stockings; then turned with a jerk,
And laying his finger aside of his nose,
And giving a nod, up the chimney he rose;
🎄 Literary Deep Dive on this section:
- has a good work ethic/ gets down to it
- not too chatty
- the jerky movement seems to indicate a spryness
- One of the greatest mysteries that puzzles historians is 'What's going on with the finger-beside-nose maneuver?"
🎅 He sprang to his sleigh, to his team gave a whistle,
And away they all flew like the down of a thistle.
But I heard him exclaim, ere he drove out of sight,
HAPPY CHRISTMAS TO ALL, AND TO ALL A GOOD-NIGHT!
🎄 Final thoughts:
We like Santa.
🤠Contact🤠©Scotty and Tony Show on Stingray™