Will there be an Automatic Election in NB? Better Know The Budget 2020

🠶Provincial Budget Vote (likely March 20)🠶
This is something to keep on your radar because it could trigger an election... the Province's budget is out now (happened Tues Mar 10) and voting happens 10 days later. Will it pass the vote? There's been different scenarios talked about... It might be a close one! If the budget is voted down, that would trigger a Provincial election automatically...
💻Opinions? Contact your MLA HERE. 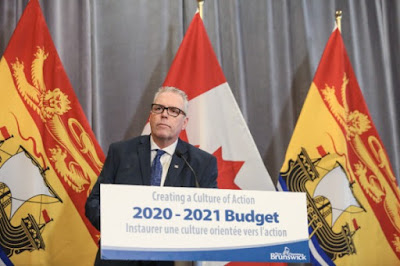 The agency that runs the province’s elections has also alerted government of the $12-million price tag it would need to run a provincial election in the coming year.
Details: https://t.co/ZsO72wEVdV #NB
— Adam Huras (@adamhuras) March 4, 2020

Recap #nbpoli:
-People's Alliance voting for the budget
-Green Party will discuss, wouldn't say yes/no yet
-Liberals maintain they will not
-Vote likely next week

🤠Every Link We Own🤠©Scotty and Tony on Stingray™