-Thanks for coming out to the Luke Bryan Show at the Hill on Saturday! The Times & Transcript says around 20,000 people were at the show… we heard ticket sales were higher ;) but the weather might've kept some folks away. ICYMI: We had thunderstorms roll through and potential dangerous conditions where people in line were taken back to the park and ride drop off until the weather cleared. We started late but things got back on time for the main event.
A bunch of photos and videos are on our social media and I'll put everything into one big blog post if you want to check it out.
Did you lose something at Luke Bryan? email info@whitecapentertainment.com
Luke Bryan Sunset Repeat Tour at Magnetic Hill, Moncton, New Brunswick Winning 50/50: A- 443628 Total pot: $20,665 Winner takes half.
.
--Some Sports stories trending…


-Big tennis story: Sunday in Toronto teenager Bianca Andreescu became the first Canadian woman in 50 years to win the Rogers Cup. She beat Serena Williams… Serena quit during the first set- she was having back spasms. When that happened, Andreescu was in the lead 3-1.
.
-There is a huge Softball Canada Slopitch Nationals happening at Hal Betts Sportsplex all week… the best slow pitch players in Canada (including a few guys who are in the Toronto Blue Jays farm system) will be hitting home runs into the river. More info (https://softball.ca/slopitch)
At the opening ceremonies last night, Moncton Councillor Paul Pellerin gave a welcome speech while wearing a Giant Foam Cowboy Hat… also MP Ginette Petitpas Taylor brought greetings from the federal government while wearing a Giant Foam Cowboy Hat©… and then representing the Province, MLA Cathy Rogers also posed for a photo in the Giant Foam Cowboy Hat… So we have reached all levels of government.
Note: kids from Moncton Fastpitch Association will be volunteering and fundraising at the event- thanks for supporting local kids!
Government officials threw out the first pitch… Councillor Paul Pellerin from the City (we stole these photos from his Facebook), MLA Cathy Rogers from the Province, and MP Ginette Petitpas Taylor from the Federal Government... 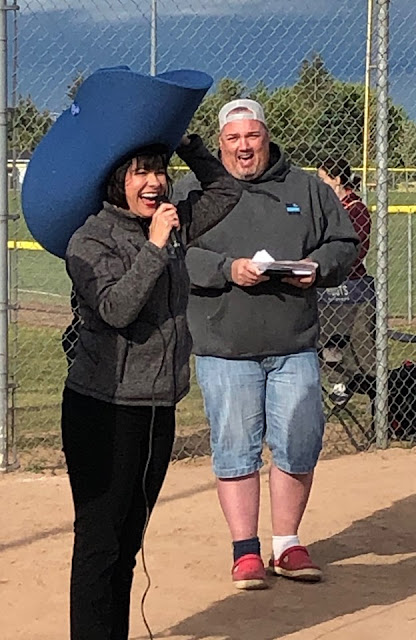 .
-(more softball news) Moncton Rebels U19 ladies won the Provincial championship yesterday against the KV Dynamite in Quispamsis. They'll move on to Easterns in a couple of weeks.
.
-One more great sports story from the weekend… Congratulations to Moncton's Genevieve Lalonde! She won gold in the women's 3,000-metre steeplechase at the PamAm Games on Saturday, and she set a new PamAm Games record!
.
-a sad story in the news: A 66-year old man from Riverview has died in a motorcycle accident. It happened Saturday, late afternoon, on Route 114 in Lower Cape. They think the motorcycle came through a corner and crossed over into the other lane.
.
-Perseid meteor shower is the best meteor shower of the year and tonight into Tuesday morning there'll be around 100 meteors an hour! The moon's gonna be bright but this meteor shower is known for really bright meteors.
.
-Our New Country Hero is Guy with Bell Aliant who came in from Shediac to deliver a replacement high speed router to the middle of a field in the pouring rain so our Luke Broadcast could go on! Thanks Guy… SALUUUUTE!!!!