#Weather (after the rain it gets cold this afternoon!!)

#Traffic
Elmwood Drive will be closed again today between McLaughlin and Morton if weather permits.

#RemembranceDayServices
Tomorrow's Remembrance Day services include the ceremony at the Coliseum tomorrow at 10:00a, the Sunny Brae Legion Remembrance Day Parade starting around 10a, Service at Anna-Malenfant School in Dieppe starting at 10:30a, and Service at Immaculate Heart of Mary Church in Riverview starting at 10:50a.
We have a list of others, and a link to find your nearest War memorial... also info on donating blood (Canadian Blood System began during WWII) CLICK HERE 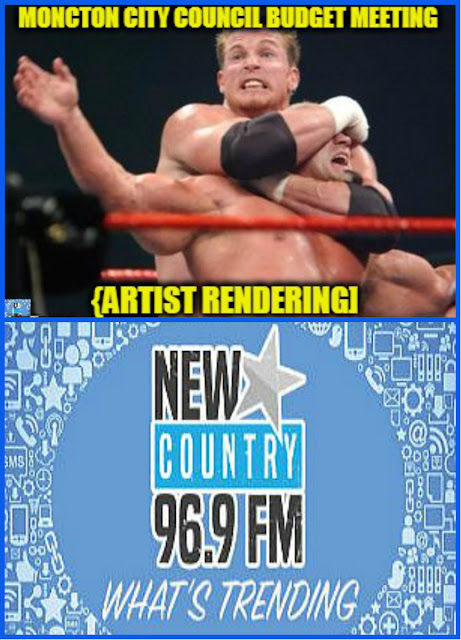 #MonctonBudget
Moncton City Council Budget Talks continue today... they say that our tax rate won't be going up... water rates are going up though... so the average household will pay $27 more year.
Deliberations will continue Friday. Budget is supposed to be approved December 18 (just in time for Christmas!?)

#MonctonCouncilFight
It sounds like this budget business at Moncton Council gets stressful.... Shane Magee in the Times and Transcript has a story about Councillors asking questions, then other councillors saying like 'People who weren't here when we covered that shouldn't ask questions- show up to the meeting next time.' (not direct quotes)
*Editorial: It sounds like it's practically a WWE Cage Match in there... we're always looking for younger people to get interested in municipal politics... maybe this wrestling angle will attract some new people??
The article has a list of who missed what over the last 100 meetings or so...

#MonctonWildcats #QMJHL #Hockey
The Moncton Wildcats play the Sherbrooke Phoenix tonight at 7:00 at the Coliseum.

#HighSchoolFootballFinals
It's Moncton High vs Tantramar Regional for the High School Football Provincial Championship on Saturday at 2:00p at Mount A in Sackville.

#LadiesHighSchoolBasketball
Good luck to teams playing in The Moncton High School Tip-Off Tournament happening today through Sunday. It's a big one- 5 teams from NB & 5 teams from NS.
Most games are at MHS, a few at Trimble too. (Finals are Sunday at 3:00p at MHS,
CLICK HERE for the schedule.

(All the sports, all the scores here (http://www.flashscore.ca/)

#BeerStoreHours
Note from Province re Liquor Store Hours on Saturday: "FREDERICTON (GNB) – NB Liquor advises customers that all of its corporate stores will be closed on Saturday, Nov. 11, in observance of Remembrance Day... outlets may be open."