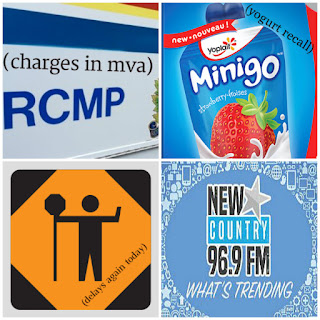 #NEWS
-cbc says that rcmp have charged 27 year old patrick cole with dangerous driving causing death... after that accident on the 106 in frosty hollow last sunday where a 19 year old sackville woman lost her life.. the victim's name hasn't been officially released so if that's what the family and the authorities want, we won't be saying it.

-rcmp did a day of spot checks and dished out almost forty tickets... so let's say it's an 8 our day... almost 5 tickets an hour or a ticket every twelve minutes!

(this happened tuesday... maybe you know someone who got nabbed... they had quite a few speeders and cell phone users. there'll be another spot check day in august... please drive safely)

-nb premier brian gallant says our province will be ready to sell legal weed next july... a bunch of other provinces are saying they're gonna need more time...

(there might be pieces of plastic in certain yoplait minigo and liberte yogurts. check out the link for specific best before dates and more info... if you have a recalled yogurt in your fridge, throw it out or haul it back to the store.)


(acadie avenue/ amireault street flood-proofing project cost 3 million less than they thought it would! because: good weather and good workers...
after acadie/amireault they'll be paving amireault between chartersville and melanson and should be done in october

(next fisher cats home game is sunday, 7p at kiwanis park, against fredericton)

parade at 6:00 tonight starts at foundry street then goes down main street to city hall for the opening ceremonies (at around 6:30p)
All the sports, all the scores here (http://www.flashscore.ca/)


#OtherStoriesToFollow
-airlines are telling folks to be at the airport 2 hours early if you're flying from canada into the states because airports across the country have started more serious security checks... they're gonna have more sniffer dogs, take a longer, harder look at electronics, basically everybody and everything gets screened more... blame the lousy stinkin terrorists...


-maybe this is the answer for parlee beach water too??