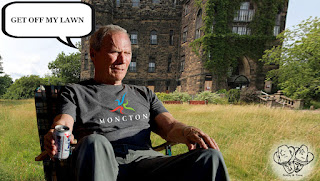 Our front lawn is available for same deal... and we'll throw in the back yard for free!

More:
The City decided to buy the front lawn of Castle Manor because the developer of the actual building was NOT THE OWNER of THE FRONT LAWN!? (so the developer was nervous that someone would build an amusement park on the front lawn*)
The City traded a piece of land downtown (a parking lot) and paid some money to the owner of that front lawn... so now it's the City of Moncton who owns that front lawn...
(So, us. We all own the front lawn of Castle Manor. #TaxDollars)
DID WE GET A FAIR DEAL?
Which of the traded properties is worth the most money?? Doesn't really matter because the City MAY HAVE TO BUY THE DOWNTOWN PROPERTY BACK FROM THE NEW OWNER for fair market value anyway. More on story HERE